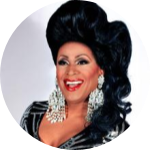 Poison Waters
Job Title
Entertainer
Institution Name
poisonwaters.com
Speaker Bio
Poison Waters is not just a personality. Poison is an experience!! Whether dressed as Poison Waters or her alter ego Kevin Cook, they are both captivating and one of a kind!
For just over three decades Poison has been having tons of FUN entertaining from countless stages throughout the Pacific Northwest and beyond. She has been coordinating, participating in and hosting an endless docket of benefits, revues and shows for various local, regional and national charities. She has been recognized and rewarded for her community service, raising awareness, and providing entertainment to such charities as Cascade AIDS Project, Dress for Success Oregon, the Make a Wish Foundation, Human Dignity Coalition, Oregon Humane Society and the American Heart Association. Poison has received the Ray C. Snively Award, The Assistance League of Greater Portland’s National Operation School Bell Award, a Lifetime Achievement Award from the International Court System, a Hero of HIV Award and the Red Ribbon Award from the Coalition for AIDS Awareness just to name a few. The booking invitations never stop! Highlights have been appearances with Pink Martini, repeat segments on AM Northwest, opening for Storm Large at her Holiday Ordeal, Drag Queen Storytelling at Multnomah County Libraries, and in 2019 celebrated her 10th anniversary recurring role in Oregon Ballet Theater’s The Nutcracker. Hundreds of thousands have enjoyed her wit, charm and beauty! When she is not enjoying her time hosting events and fundraisers or traveling the globe, she is the co-hostess at the legendary Darcelle XV Showplace where she has been wildly popular for almost 30 years.
2020 marked the 20th year volunteering with summer camps for children whose lives have been affected by HIV. Poison, as Kevin is the Camp Director for Cascade AIDS Projects’ Camp KC (Kids Connection). During the Covid 19 global pandemic, Poison went virtual, bringing her Drag Queen Bingo, Drag Queen Storytime and event hosting to thousands of new fans all over the world.
Whatever the title, event, cause or venue, one thing remains the same: the important bond between Poison Waters and her audience. She remains, “the smile on the face of Portland.” www.poisonwaters.com
Speaking At
Conference Social: Drag Queen Bingo
Close